Retro-futurism for everyone; what do the ‘Back to Future 2’ sneakers and Elon Musk’s Cybertruck have in common?

Both are Retro-futurism creations, with some critical differences.

‘Back to Future 2’ sneakers are a piece of ‘Proper Retrofuturism,’ revealing how previous generations thought their future might look like.

On the other hand, Elon Musk’s Cybertruck is Futuristic Retro, depicting how the past should have looked like, as seen from the future. 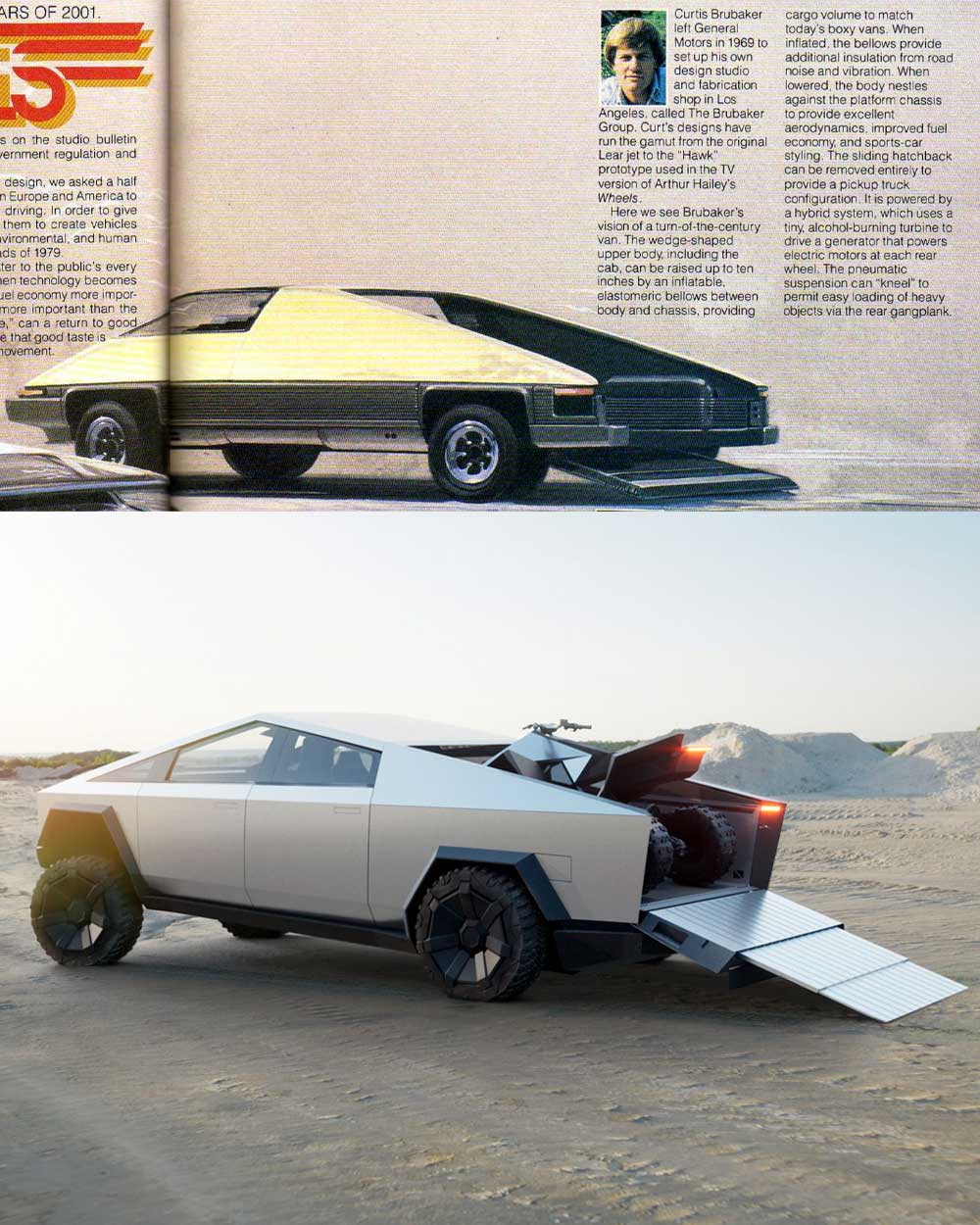 Retro-futurism plays a massive role in the contemporary world we live in, from media to design and from technology to fashion.

In this comprehensive guide in Retro-futurism, I’ll detail the origin and definition of this current.

I’ll then introduce you to the latest Retro-futurism themes, such as the ones described above.

We’ll then look at the Retro-futurist aesthetic and how it draws inspiration from the factories, buildings, cities, and transportation systems of the early “machine age” to influence contemporary art, literature, music, and fashion.

We’ll continue with the top retro-futuristic genre right now, such as Cyberpunk, Steampunk, Dieselpunk, and so on.

Finally, we’ll look at the role of Retro-futurism in Fashion from the early days until now, some of the most influential designers of our times.

What is Retro Futurism?

Part utopian and part dystopian, the shortest retrofuturism definition is:

“A cultural movement depicting how the future was viewed in the past: flying cars, zeppelins, laser guns, floating cities, tube transportation, time travel, the conquest of the galaxy, personal robots, and submarines.“

Retrofuturism was born as a skeptical approach to futurists’ dreams and fevered visions of flying cars, robotic servants, space colonies, and interstellar travel.

While overall positive, Retrofuturism also explores themes of potential tension between past and future and the alienating effects of technology on humanity.

Retrofuturism can be separated into several genres, each according to the depicted technological and cultural era.

The most popular retrofuturist genres are cyberpunk, steampunk, atompunk, dieselpunk, and raygun gothic.

Driven by a general sense of dissatisfaction with the present and the world today, there is a good amount of nostalgia in retro futurism.

The retro futurism meaning is linked to its earliest use, as recorded by the history books.

The first time the retro-futurism term appeared was in a Bloomingdale advertisement, in a 1983 issue of The New York Times.

According to the Oxford English Dictionary, the advert describes jewelry of “silverized steel and sleek grey linked for a retro-futuristic look.”

However, the genre’s birth can be traced back to the 70s retro futurism vibes, when technology was changing the world fast.

From the advent of the personal computer to creating the first animal clone, this period was characterized by profound technological changes.

Times of question about how the coexistence of past, present, and future in the light of preserving culture, history, arts – without being crushed by the accelerated technological progress.

These fantasies depicted how our grandparents used to see a not-so-distant future, eventually becoming the subject of retro futurism artwork.

“The most modern concepts of retro futurism design blend cultural elements of the past with pop culture, concepts of scientific progress, innovative technology, and lots of science-fiction aesthetics,“

However, regardless of the constituent elements used to describe a retrofuturistic vision, all of them cover two main themes:

The first trend, Proper Retrofuturism, is inspired by the writers, artists, and filmmakers of the 60s and their visions of the future.

When explored now, in modern times, those futuristic visions confer a nostalgic feeling of what the future might have been but is not.

The second trend, futuristic retro, is the inverse of the first.

It is built on an appeal of old styles of retro futurism art, clothing, movies, with futuristic technologies grafted onto it.

The aim here is to create a mélange of past, present, and future elements, often found in fashion styles.

Often debated on the retro futurism Reddit page, Steampunk is an excellent example of both trends:

Proper Retrofuturism – by ‘infusing’ futuristic technology into past events to create, for example, an alternative Victorian age.

Futuristic retro – by using old Georgian styles in a modern technology context to create futuristic looks of a neo-Georgian flavor.

It is hard to distinguish the lines separating these trends in fashion as both contribute to a similar retro-futurist vision.

Another critical aspect to both retrofuturistic trends is that neither is time-bound.

Whenever a time period is used in a story, the historical truth is preserved, but the future is always, as expected, of an imaginary nature.

Kraftwerk’s retro-futurist visual imagery and language, as expressed in their 70s albums, has been referred to by the Irish-British music scholar Mark J. Prendergast as “nostalgia for the future.”

Prendergast went further explaining that the imagery describes a futuristic progressive Germany that never was but could have been, and now, thanks to Kraftwerks’ work, could – hopefully – happen one day.”

There are lots of polished silver, metallic elements, and impractical whites that would be difficult to keep clean in the often “very dirty present” of the nineteen-fifties.

Some of the most popular genres of Retrofuturism are Cyberpunk, Steampunk, Dieselpunk, Atompunk, and Raygun Gothic, each depicting a potential future from a specific time. 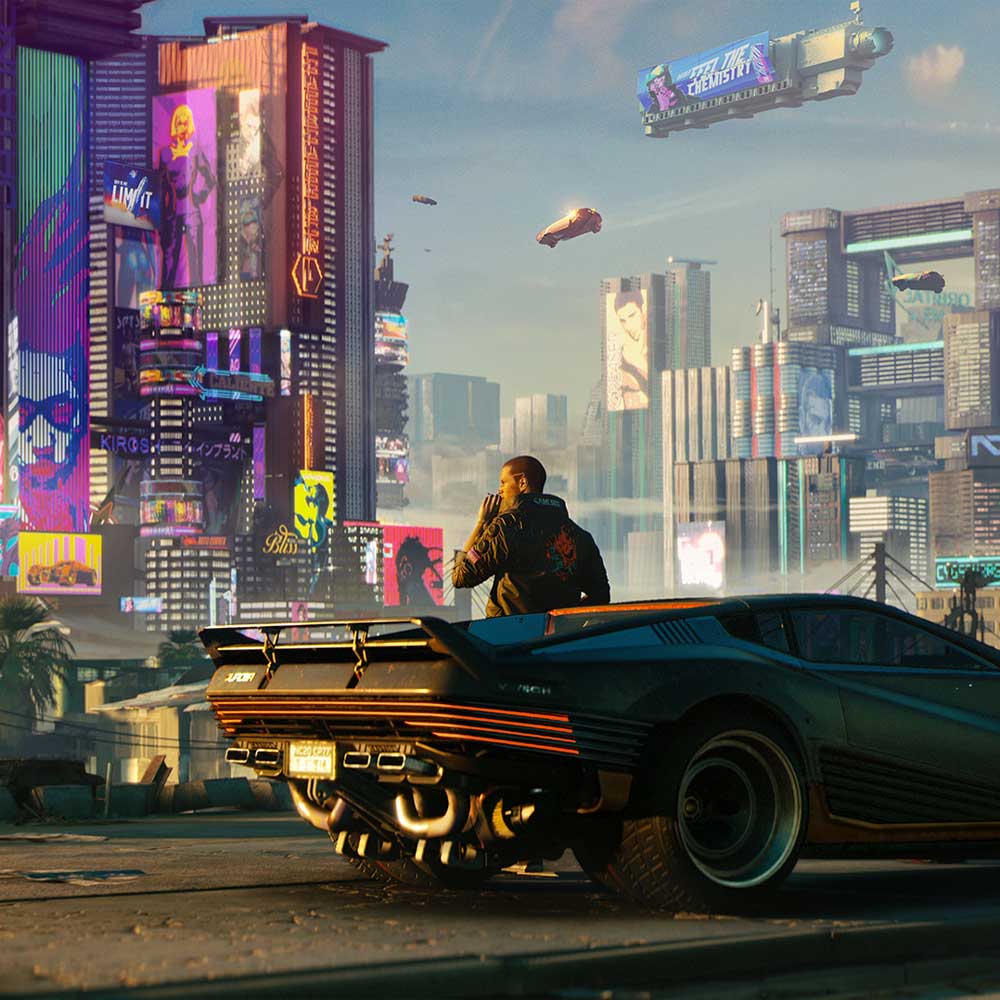 Originating in the early 80s Cyberpunk, was the first to be recognized as a retro-futurist genre.

Compared to other genres, Cyberpunk describes a dystopian future or a post-apocalyptic world helped by outlaws hacking the futuristic machines controlling humanity.

If you are looking for a quick explanation of Cyberpunk, watch the 1982 Blade Runner movie. (check out the Blade Runner 1982 poster)

The movie has almost all characteristics of the cyberpunk genre, from architecture to fashion and back.

The post-apocalyptic variant is associated with Retrofuturism, as the characters recourse to a mixture of old and new technologies to survive.

As a retro futurism fashion style, Cyberpunk clothing is one of the richest and most used, even as streetwear fashion.

Another two genres worth mentioning here, as part of the retrofuturist Cyberpunk aesthetic, are Synthwave and Vaporwave. 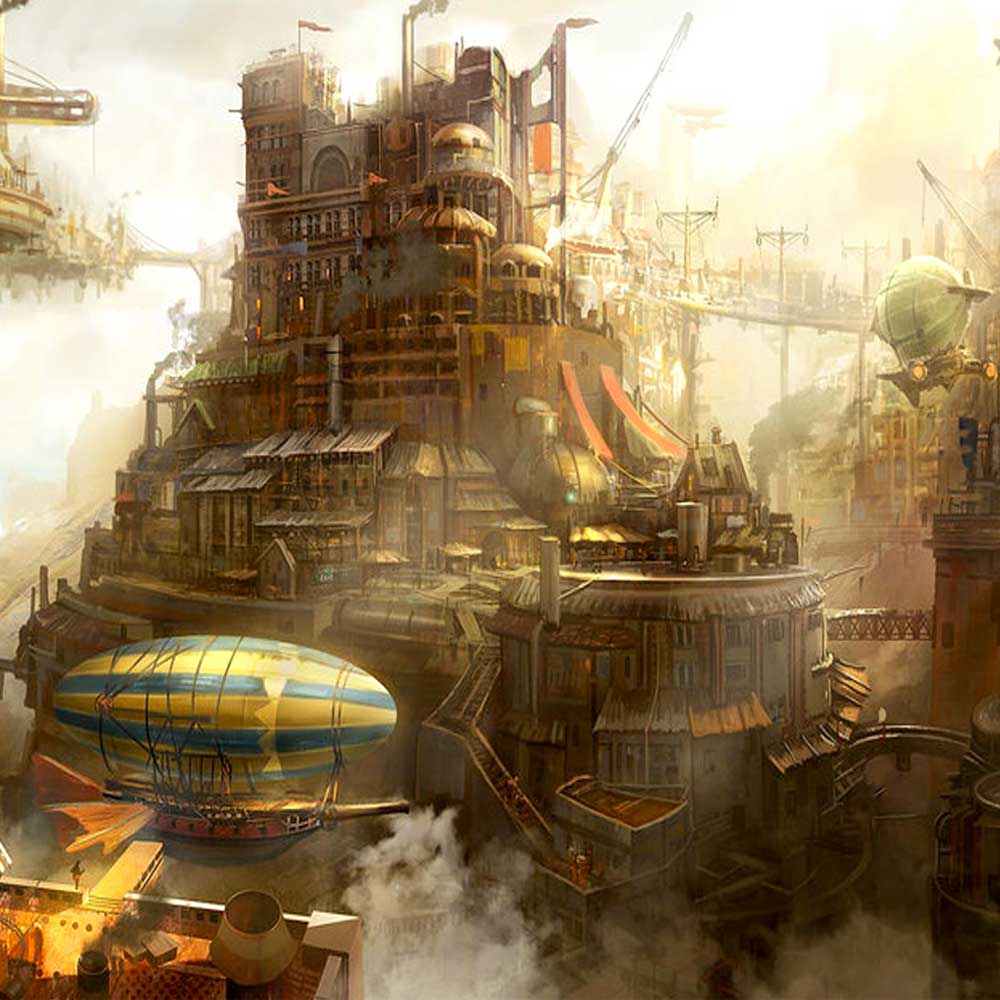 The second retrofuturist genre recognized as a genre of its own was Steampunk.

Although the steam engine was invented in the 18th century by James Watt, steam was a symbol of progress throughout the nineteenth century, and that is the time Steampunk is aiming at.

The steampunk genre has a distinguished aesthetic compared to Cyberpunk.

The cyberpunk genre encompasses the theme of “high tech – low life” fears of the late 80s.

On the other hand, Steampunk describes a retrofuturistic universe that incorporates technology and aesthetics inspired by 19th-century industrial steam-powered machines.

In that light, Steampunk references electricity as a mysterious force considered the power source of the future.

Electricity is also regarded as possessing mystical healing powers, similar to how nuclear power was perceived around the middle of the 20th century.

In essence, Steampunk takes the contemporary digital world and puts it into the Victorian age. 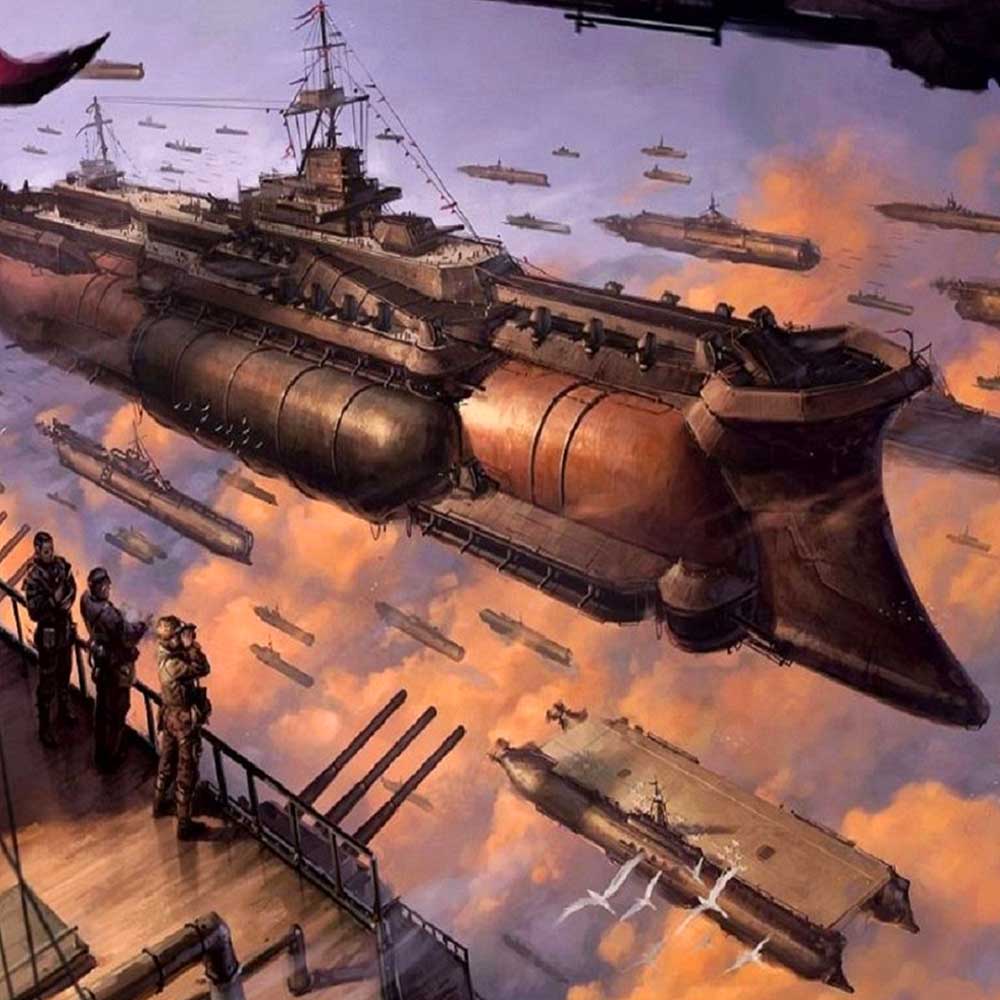 The most recent retrofuturistic genre is Dieselpunk.

The term Dieselpunk is also associated with Decodence – a contemporary movement of Art Deco – but in a more sophisticated form.

Dieselpunk covers the 1920s to 1950s, and it is infused with the alternate history of a different World War II, where the Axis claims victory. 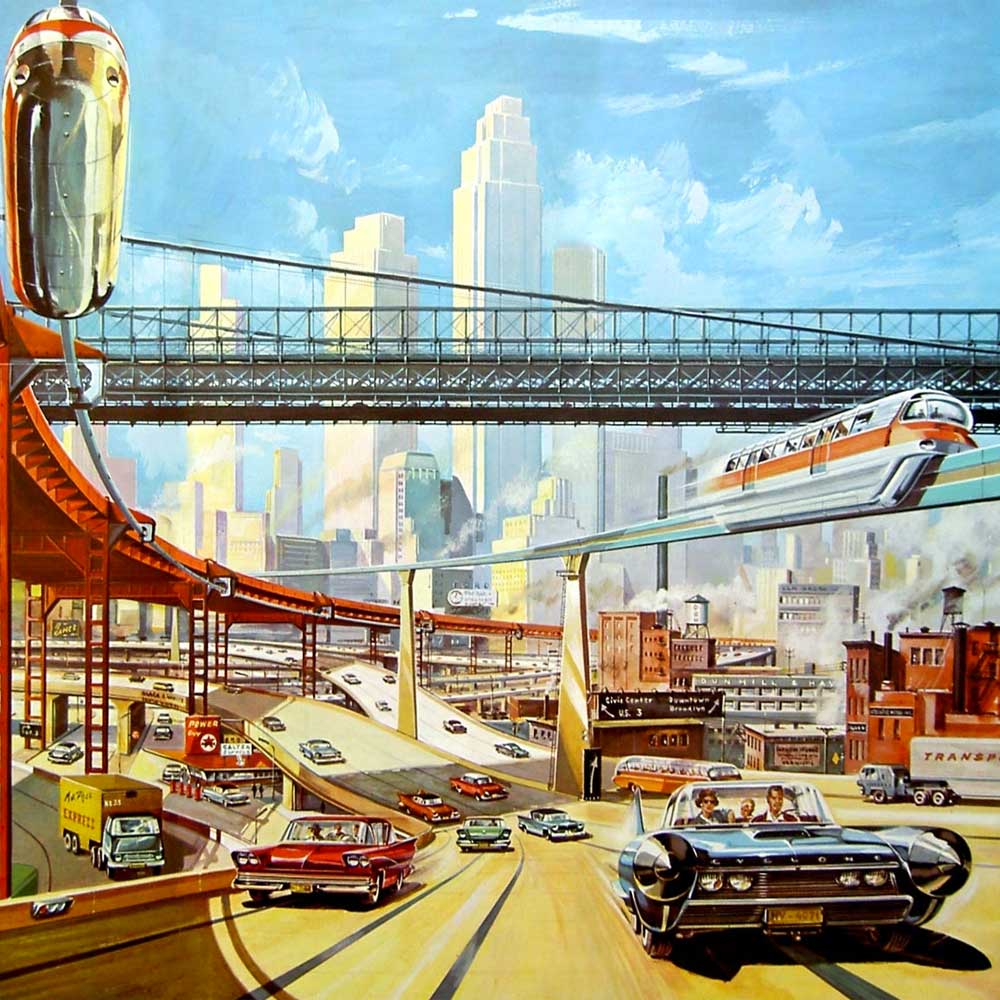 Atompunk is an aesthetic centered around a view of the future from the perspective of the 1950s.

Atompunk envisions a utopian future characterized by bubble domes, glittering cities, and hover cars for everyone, all powered by nuclear energy.

Atompunk styles and fashion draw inspiration from the SCI-FI magazines and movies of the 50s-60s, their vision of the future, and the “traditional American values,” nuclear family, and suburban lifestyle.

The genre is depicted on t-shirts adorned with graphics invoking the covers of pulp SCI-FI comic books of those times – which can also be sexually suggestive at times. 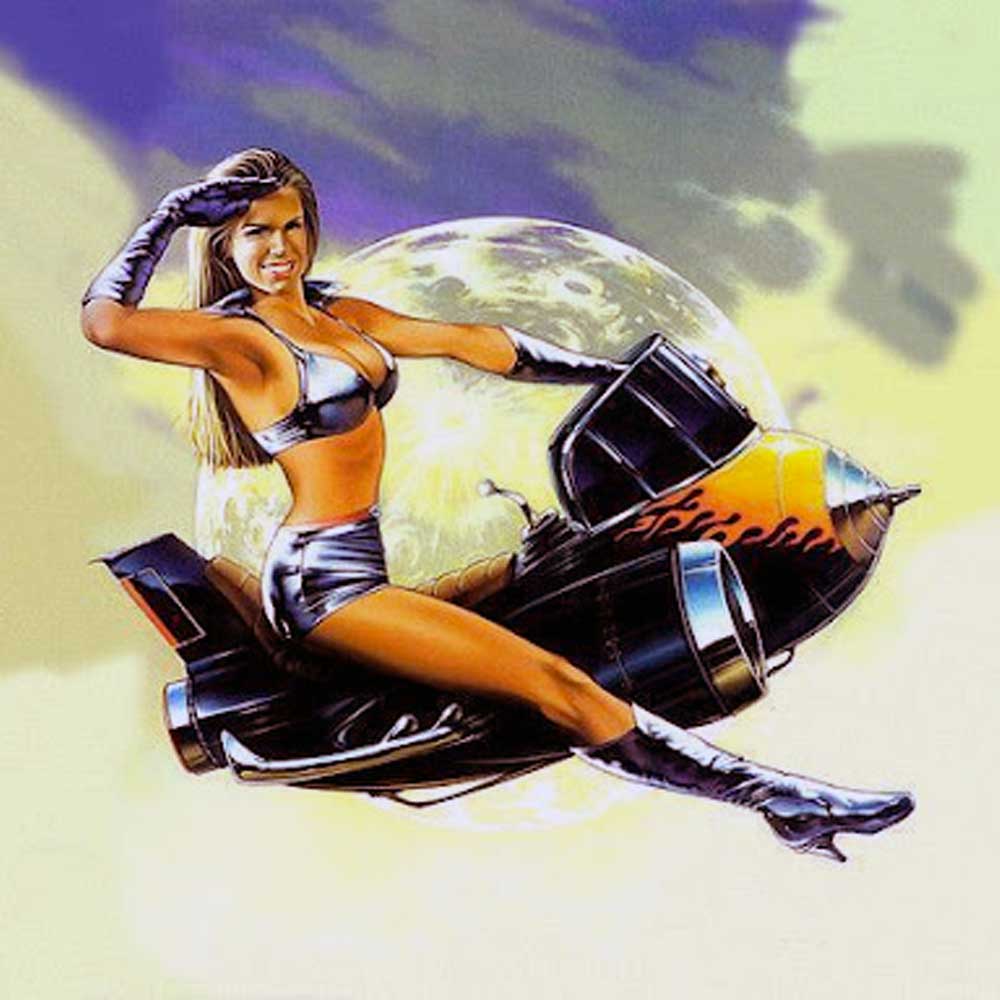 Raygun Gothic is a catchall term for a visual style that incorporates various aspects of the Streamline Moderne and Art Deco architectural styles when applied to retrofuturistic science fiction environments.

Raygun Gothic is mainly used and applied in SCI-FI images. 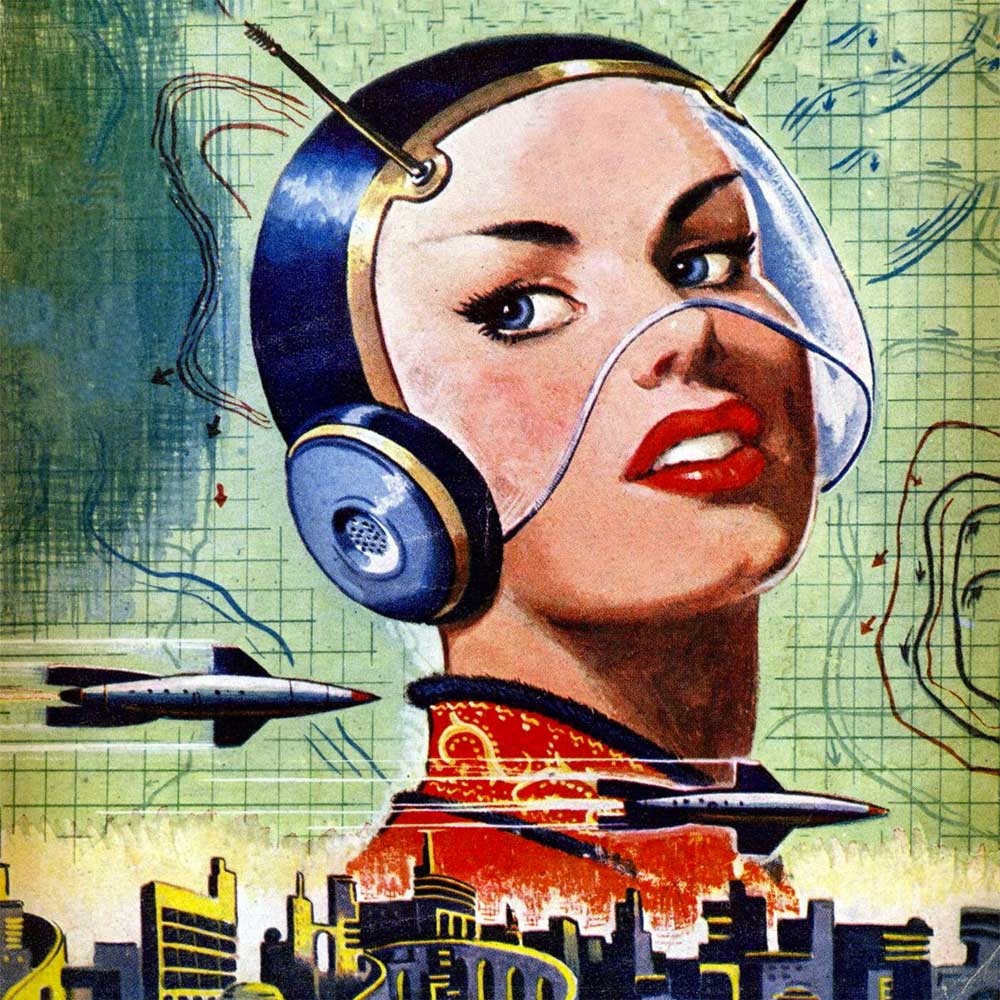 The term first appeared in “The Gernsback Continuum” is a 1981 science fiction short story by American-Canadian author William Gibson.

The “Gernsback” in the title alludes to Hugo Gernsback, an American pulp SCI-FI magazine pioneer of the early 20th century.

Raygun Gothic is most similar to the Googie or Populuxe styles:

What is Retro Futurism Fashion?

Retro futuristic clothing describes garments created to depict an imagined vision of what people might have worn in the distant future.

The cliché of futuristic clothing has now become part of the idea of Retrofuturism.

Retro-futurist fashion is mainly driven by past media creations depicting the garments of the future as either dystopian survival kits or space travel uniforms.

Futuristic fashion plays on these now-hackneyed stereotypes and recycles them as elements into creating real-world clothing fashions.

“For the last 20 years, fashion has reviewed the times of past, decade by decade. What we see now is a combination of different eras into one complete look,“

And Nathalie is correct, as each retro-futurist fashion apparel tends to follow a historical theme of a particular era, augmented to accommodate a contemporary context.

In a 1964 collection, Cardin even deemed it “cosmocorps,” with his astronaut-like garments — think jumpsuits with asymmetrical zippers — replacing the stiffly-collared shirts then currently en vogue.

In 1969, NASA even commissioned Cardin to design a spacesuit of their own for actual space travel.

That being said, it was Courrèges’ founder, André — not Cardin — who’s widely considered the “father of Space Age fashion.”

But Cardin did something that even his closest colleagues did not, and that was to intentionally sell the future as a truly better, more inclusive place.

“He was an idealist, but I don’t think he was selling escapism,” says Ruth La Ferla, a New York Times reporter who wrote Cardin’s obituary for the paper. “People who now refer to him are indulging an escapist mentality because God knows we need a change.” 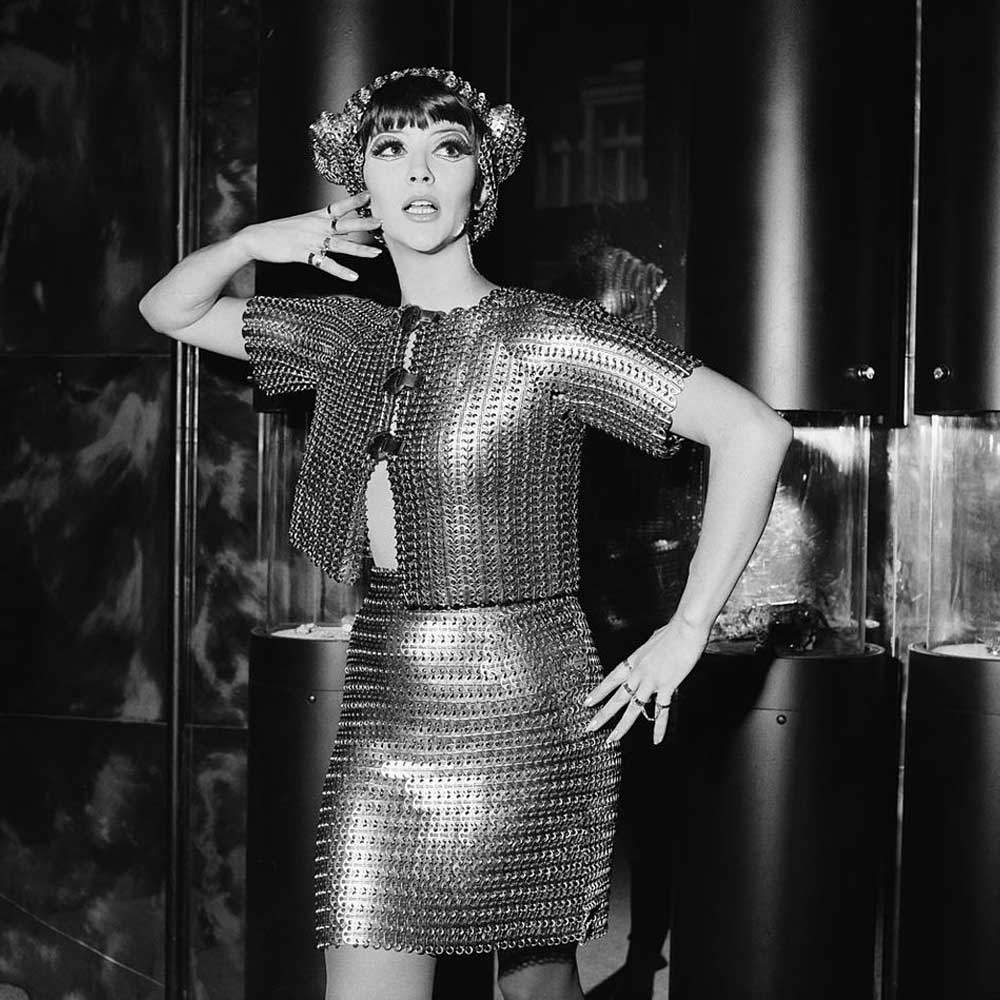 Since joining the Parisian label as a freelancer in 2013, designer Julien Dossena has been tasked with returning Paco Rabanne to its ’60s heyday.

Once beloved by the likes of Jane Birkin and Françoise Hardy, the brand had diverged from the now-retro chainmail minis that had made it a Space Age staple.

But in September 2018, Dossena reeled it back in, debuting a sophisticated collection that was every part of Jane Jetson’s fantasy. 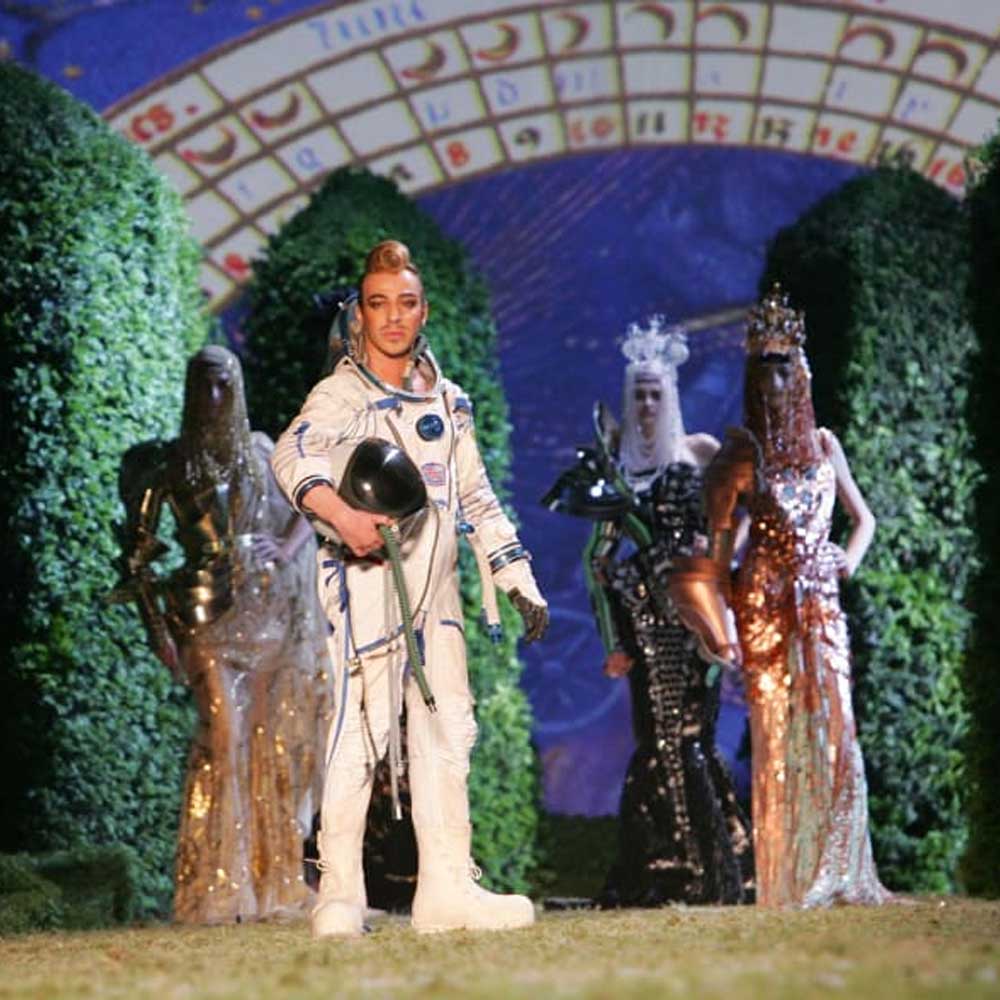 Most recently, Dior’s Pre-Fall 2021 range dives into the sort of groovy youthfulness

And just like Cardin once did, contemporary designers are craving the sort of optimism that only the idealistic future can provide.

“The spirit of retro-futurist fashion acts as an antidote to uncertain times. That is because it embodies ideas of freedom, liberation, and hope that the future is exciting and full of potential,“

“Modern retro-futuristic ideas embody utopian simplicity reimagined with honed levels of comfort, as well as a sense of fun that offsets the global pandemic.

It is this retro-futurist simplicity that aligns beautifully with the consumer’s growing interest in comforting nostalgia,“ 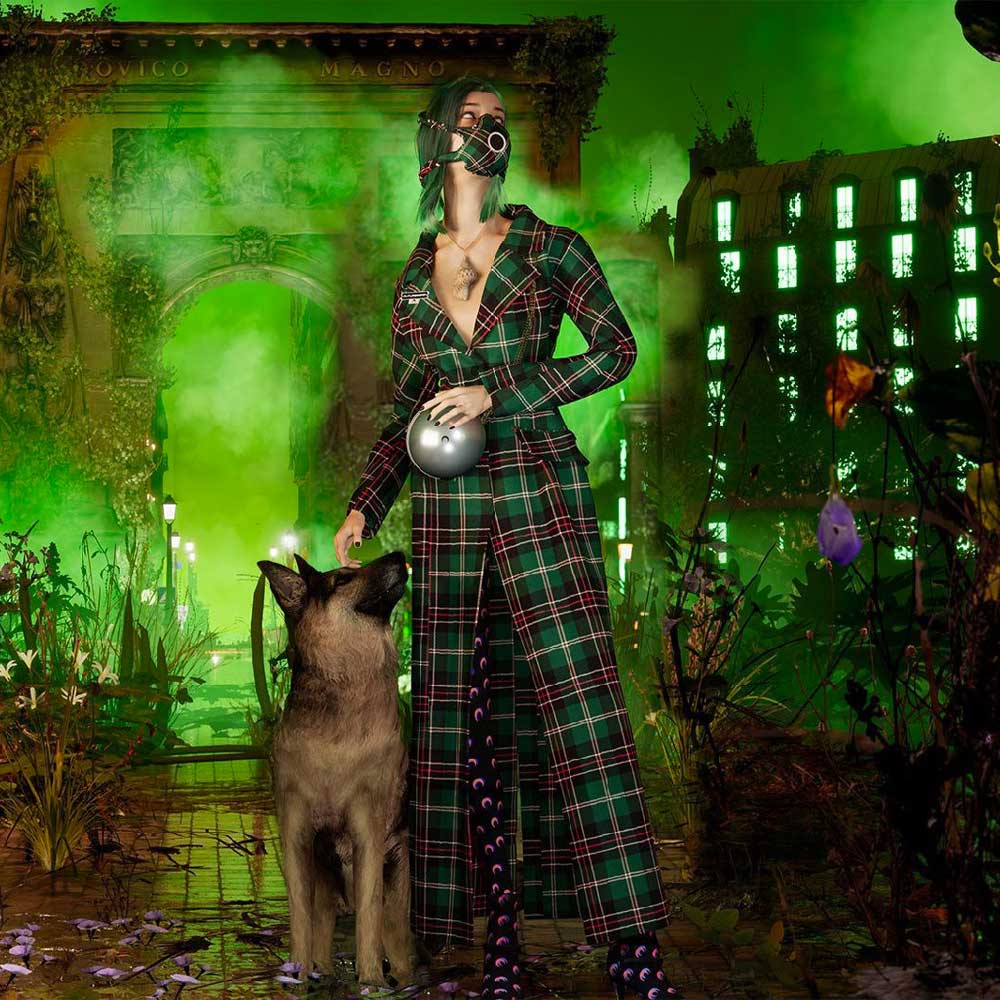 It is in human nature to use the future to plop one’s complex hopes and dreams.

However, in the process, pieces of nostalgia for a past that didn’t exist, become fetishized as we see in Marine Serre’s creations and her alien unitards.

Retro Futurism is constantly morphing and shaping genres constructed by and constructing aesthetics in the future while implementing minor aesthetics and current visions in consumer culture.

As such, new genres will continue to appear and shape our idea of retro-futurism aesthetic, culture, and fashion.

You have Successfully Subscribed!

Which retro-futurism genre is your favorite and why?

Are there any other great examples of retrofuturism fashion, architecture, or artwork you’d like to add to this list? 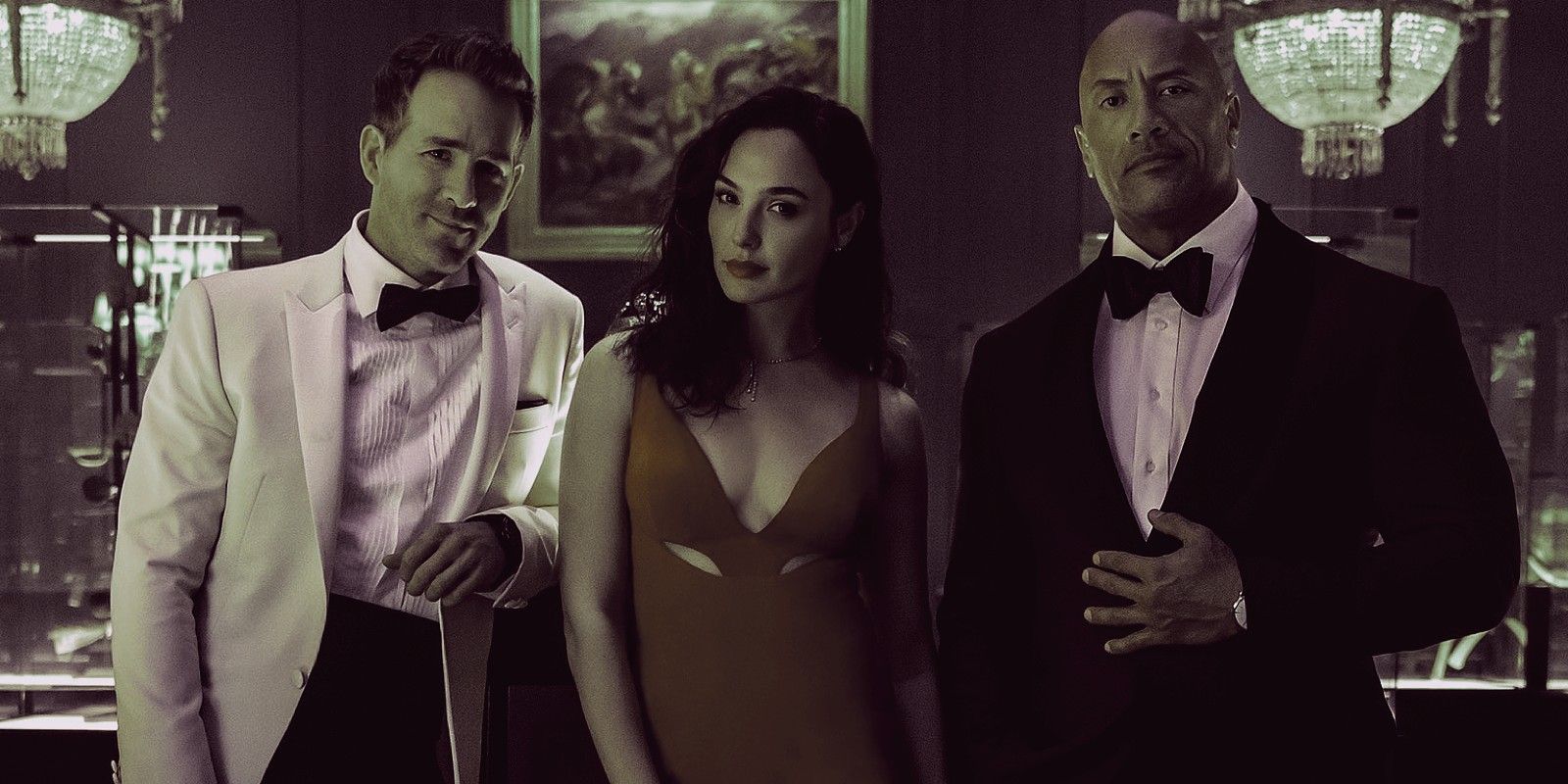