Seven members of a Royton cycling club are planning an ‘epic’ bike ride from Royton to London to raise money for a cancer charity after one of its members was diagnosed with prostate cancer.

A handful of members of the SIP Cycling Club, which meets every Sunday at The Courtyard Brewery in Royton, are planning a charity bike ride following a strict 220-mile route from the Secret SIP in Royton to the Olympic Park Velodrome in London .

The challenge will take the whole day of the team as they plan to depart at 4am and arrive at their final destination around 9pm on Saturday August 6th.

The cycling club meets every Sunday in Royton and welcomes cyclists of all levels.

However, it’s all for a good cause – to raise money for Prostate Cancer UK after club member Jason Barrett was diagnosed in November 2021.

Geoff Abram, who organized the charity bike ride, said the team racked up “lots of training miles” in preparation for the big day, covering between 50 and 70 miles per training session per week.

Mr Abram said the group was obliged to do something to ‘show our support for Jason and the charity that supports his illness’.

He said: “It’s brought everyone together – we’re really looking forward to raising awareness and much needed funds for this great charity and showing our support for Jason.

“We hope the weather will be good for us and that we will have a great day on the bike as a team. 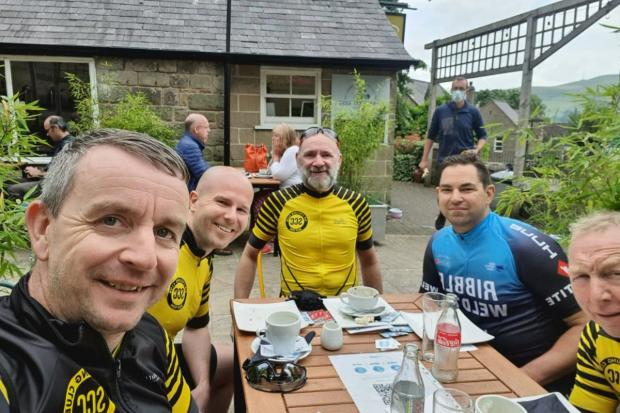 The group meets every Sunday at The Courtyard Brewery in Royton, where they then meet for a social evening.

“It will be great to have family cheering us on (on) along the way and finally meeting us at the finish for a well deserved celebratory meal and a few drinks.”

Mr Barrett said he hoped to participate in some way, but his efforts would be limited due to symptoms and ongoing treatment.

But the 52-year-old said treatment so far was ‘ongoing but looking really positive’.

Mr Barrett added: “I’ve just been given the green light to start cycling again so I’m really looking forward to getting started.

The charity bike ride will take the team all day, leaving Royton at 4am and arriving in London around 9pm.

“I was absolutely amazed when I heard that SCC was taking on this challenge to raise funds on my behalf.

“It’s an epic race for a great cause.

“Thank you to everyone at Christie Hospital in Withington whose incredible work has undoubtedly saved my life.”

At the time of this writing the club have raised £3,392 for the charity and donations can be made through their Just Giving page here: https://www.justgiving.com/team/SIPCC-RoytonToLondon?fbclid =IwAR1-Syb4nLUNbtjwPgQFcDZu-ZwPvyN9uy2KCLxHFiJvatbmFSMJz7qwE6k

Riverside Access to Riverside Is a Reality – The Resident Community News Group, Inc.

Trash or treasure, this group helps you find it for free